Empoli Football Club celebrates its centenary with “Sentimento Empoli”, an interactive collectible sticker album in Augmented Reality thanks to MoreGlobe.

Turning one hundred is an important milestone, even for a soccer team. Empoli Football Club has recently reached “quota one hundred” and has decided to celebrate its centenary by giving its fans a unique gift of its kind: Sentimento Empoli. It is an album of collectible stickers in Augmented Reality. To make the publication interactive we thought the team of MoreGlobe. Let’s find out more.

Through 500 stickers with vintage photos and exclusive images, Sentimento Empoli traces the one hundred years of history of Empoli Football Club and allows fans to relive the emotions of the past in a way never seen before. Thanks to the Augmented Reality function of MoreGlobe, in fact, just frame the pages of the album to see the stickers come to life: you can see memorable goals, listen to interviews with champions, dive into the choreography of Castellani and relive the victories of the Azzurri. 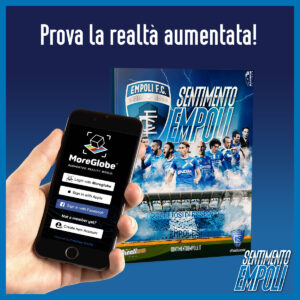 The album is organized into 20 monothematic chapters. The “protagonists” have been selected according to criteria such as appearances, number of goals, trophies won and the importance they have had for Empoli and its fans. All the cards were made with moving images taken from private collections and historical archives of photographers and local television stations: there are archival photos, rare images and unpublished documents. The collection opens with the chapter “Amarcord”, a journey through the first years of Empoli’s history through archival photos and exclusive images. This is followed by chapters dedicated to the “Captains”, the “Infallible Bombers”, the “Winning Teams”, the “Memorable Victories” and the choreography of the “Curva Azzurra”. Another strong point of the project are the two chapters dedicated to the “Young promises” – the champions of Empoli’s youth teams, grouped by age – and the “Galassia Empoli”. The latter, in particular, hosts the Empoli Ladies and Empoli FS stickers, the fourth category team made up of boys and girls with cognitive and relational disabilities.

Making the album even more exciting is Augmented Reality technology. Thanks to MoreGlobe, the album literally comes to life on the screen of any smartphone. All fans have to do is download the free MoreGlobe app (available on the App Store for Apple devices and the Play Store for Android) and frame the stickers: unique content, such as memorable goals and the choreography of the Carlo Castellani stadium, can be reviewed in 3D. Tavano, Maccarone, Vannucchi, Buscè and Di Natale are back to run, score and cheer on the screen of your phone: something never seen before!