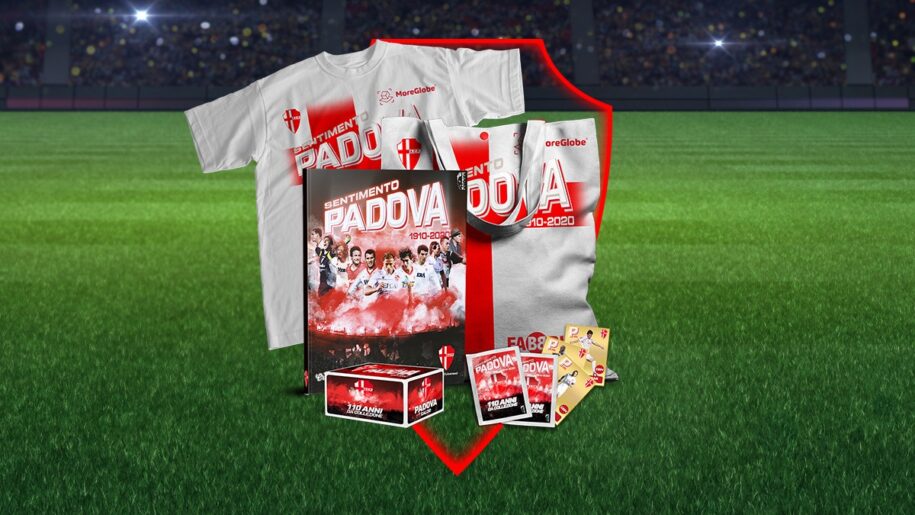 Sentimento Padova is the first interactive collector’s album in Augmented Reality dedicated to the history, the victories and the fans of Calcio Padova.

A new interactive publishing project by MoreGlobe! The Augmented Reality platform confirms its leadership in the field of Augmented Reality publishing and launches “Sentimento Padova”. This is the first collector’s album in Augmented Reality dedicated to the history, the victories and the fans of Calcio Padova. The project was developed in partnership with the Biancoscudata club to celebrate the hundred and ten years of the Venetian club.

Through 20 single-topic chapters and 500 stickers, the interactive album “Sentimento Padova” retraces the entire epic history of the Venetian club – from the golden years until today – and allows fans to relive the emotions of the past in a way never seen before. Thanks to Augmented Reality technology, in fact, fans can frame the stickers with the free MoreGlobe app and review vintage videos, highlights, interviews and memorable goals directly on their smartphones.

Unlike the “classic” sticker albums – which tell the story of the current season – Sentimento Padova is a historical album. It is a true story told through images that retrace the 110 years of history of the biancoscudato club. There are real gems – like the plane ticket that Sporting Director Piero Aggradi took to fly to Amsterdam to convince Michel Kreek in 1994 – and unpublished documents. Each sticker is a piece of history to be collected and treasured. The cards are accompanied by in-depth texts and captions that complete the story and reveal curiosities and anecdotes that are truly interesting.

Sentimento Padova is enhanced by the technology of Augmented Reality. Thanks to MoreGlobe, the album becomes interactive and comes to life on the smartphone in a very simple and intuitive way. The fans just have to download the free MoreGlobe app (available on the App Store for Apple devices and on the Play Store for Android) and frame the stickers: they can review historical actions and memorable goals, listen to interviews with the old glories of Padova, dive into the choreography of the Euganeo and relive the great victories of the Biancoscudati. Galderisi, Di Livio, Maniero, Cunico and Longhi return to run, score and exult on the screen of the fans’ phones!

To learn more and to buy the interactive album of Calcio Padova visit the official website www.sentimentopadova.com