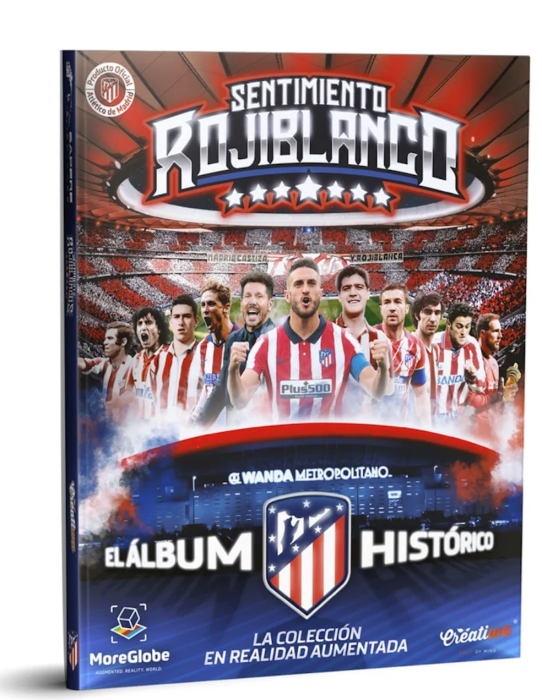 Posted by Giovanni Stifano on November 10, 2022 | Featured | No Comments

Here is Sentimiento Rojiblanco, the first Atlético de Madrid historical and interactive sticker album full of moments and emotions. This is an album that allows you as a “colchonero” to transfer the red and white passion between generations. An exciting journey thanks to the augmented reality technology that allows this book of memories to be interactive. Atlético de Madrid is a special club because of the titles it has won and the passion it has inspired in its history of nearly 120 years.

We at More Globe have designed historical and interactive albums in augmented reality, such as the Valentino Rossi MotoGP album. Now we present Sentimiento Rojiblanco, a project that will give goosebumps to all colchonero fans and will also be an appreciated item for collector.

In 1903, a group of Basque students living in Madrid decided to open a branch of Athletic Club de Bilbao without realizing that it would be the beginning of one of the most important clubs in European and world soccer.

There are 576 cards that show the evolution of the shields and jerseys, stadiums, goals and the most important formations, as well as the presidents, master builders from the point of view of club management, work that cannot go unrecognized. There are also legends in the world of international football who have worn the red and white shirt and who have given so many emotions to the red and white fans from Monchin Triana in the twenties, Paulo Futre, to the most recent ones like Fernando Torres, Koke. It is an innovative and precious item for all colchoneros of all ages and also for any fan collector and fan of Atleti.

To learn more and to buy the interactive album of Atletico Madrid visit the official website www.sentimientorojiblanco.creatiwa.eu